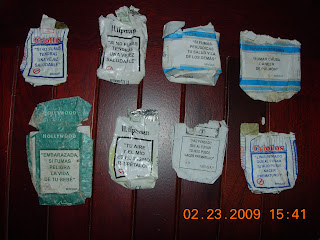 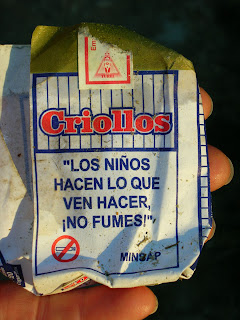 Feb. 23 - As we walked along the trail at La Turba, indeed, as we had walked on other trails as well, I noticed that the litter was about 50% used cigarette packs. On one side of the packs was a large warning about the dangers of smoking. Cooby became interested in these packs too and we compared each pack we found. The warnings were fairly comprehensive, but seemed to have little effect because a lot of people still smoke. The warning on the single pack photo says that children will do what they see you do, so don't smoke. Some of the other warnings had to do with babies being born prematurely to smoking women, with the inevitability of getting lung cancer if you smoke, etc. Cooby even found the most graphic one (and I regret that we don't have a photo of it) that actually had a photo on one side of the pack showing an open mouth with infected gums and grossly yellow teeth. It was really hideous. Jesus told us that the cigarette companies were required by law to post the warnings. He said the warnings were made up by the companies and were changed every few months. A valiant public health effort.
Posted by Nora Schwab at 10:00 AM